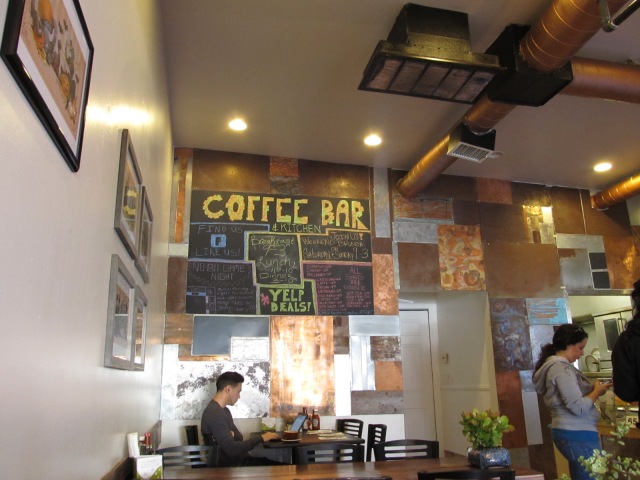 Like many alternative and creative types, I threw myself into steampunk when it reared its brassy, cog-cluttered head a few years ago. And, like many, the glut of steampunk everything eventually became unbearable and I lost the ecstasy.

But I do have an appreciation for steampunk done well if not just for the aesthetic appeal. So when my coffee companion, Justi, told me about SteamPunk CoffeeBar + Kitchen in North Hollywood, jaded as I am, I immediately said, “let’s do this.” 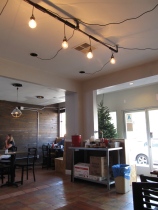 The coffee shop sits on a nondescript street. Strip malls, fast food, a random mix of small businesses. That kind of street. On this street, the café’s woodwork saloon storefront stands out. Inside it’s tats and laptops. The cashiers/waiters/possibly owners are friendly. They have a great breakfast menu–no cold pastries and bananas in baskets here. Justi and I ordered a traditional scramble and a coffee; we grabbed a table without any hassle. It always seems like we’re just ahead of the morning crowd.

I like the idea of writing feng shui and believe décor, as a component of atmosphere, can lend to (or stifle) one’s flow. I’d love nothing better than to write in a forest where the tree trunks are made of book bindings and the leaves of pages. Steampunk did originate in literature, so why shouldn’t steampunk décor provide some inspiration even if my works in progress have nothing to do with the genre?

Unfortunately, our arrival may have been premature for a moment of steampunk catharsis. The shop had that “still moving in” smell. And that’s how I learned that Justi is quite the interior designer (which was further explored at our next stop). She had a wealth of ideas for how the restaurant could improve their look on the cheap, and I recommend they hire her for a consultancy.

The place had some art by Brian Kesinger and the area behind the cash register was thought out with coppery panels on the walls and an early 20th(?) century cash register behind the counter. But after that you get bare white walls, exposed wiring (not in an artistic/crafty way) and unremarkable chairs and tables. If the draw is steampunk décor, the shop has a long way to go.

But–BUT–I got a lot of work done. At the time, I was rushing toward a deadline with my graphic novel and had a lot of revising to do before day’s end. Even with the distraction of good food, I got a ton of work done. The morning crowd never got too bad–an advantage of the shop’s newness, I suspect. It wasn’t too loud or cramped. I think it has great potential, especially if the service and food remain consistent.

It was after visiting The Trails that I wondered if my next series should be “Strangest Places to Write in L.A.” The Trails is a coffee shop housed in a miniature cabin nestled in the woods of Griffith Park. No inside seating, just picnic tables but plenty of them. Best check the weather forecast before making plans to write here unless you prefer your paper soggy, your ink spattered, or your laptop fizzling. It was a surprisingly hot winter’s day when Justi and I made it out to Trails. Luck is always on the side of the voyager (unless you count the Donner Party…or Amelia Earhart…or Ernest Shackleton…or…). 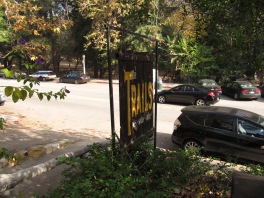 There’s a fairytale feeling about this place. A fairytale that includes WiFi. Yes, outdoorsy WiFi. We couldn’t believe it either.

When you approach the front of the line (and I get the feeling there’s always a line), a gaggle of delectable baked on-site pastries peeks out at you from the window, and you’ll almost certainly order one. I got a strawberry rhubarb mini-pie because I can’t resist anything in miniature.

I got a decent amount of work done, even with a children’s party in full, screaming, swing around us. Oddly, the white noise of children may have helped (although I had to make sure none of the more horrifying images from the graphic novel were on my screen when a kidlet was nearby).

I’d say Trails is the place to go if you’re having writer’s block. If such a thing afflicts you, Justi suggests considering Walden while walking the trails, drinking a hot, deliciously piny cup of lapsang suchong.

Instead of searching the trails for plot devices and tropes, we went in search of branches, ill-prepared for clambering up hills (but clamber we did), because Justi had an attack of DIY after the steampunk place and needed a shelf. What better way to end a day of writing and caffeinating?

9 thoughts on “Best Place to Write in Los Angeles #2”