I shielded my eyes from the sun and stared out at the quiet, open street in front of a folksy, colorful cafe. I would never have traveled down that section of Alhambra Avenue on a random search for coffee and would later pause to thank whatever coincidence led Justi to learn of Holy Grounds‘ existence. It was Justi I waited for. She was joining me for coffee, as usual, but not for the usual reasons.

I didn’t have my laptop and loose pages of ink-splattered manuscript that day. We weren’t meeting to write or study; we were meeting on personal business–to talk about endings and beginnings. We were both going through the same thing at the same time, and I for one needed to bend a nonjudgmental ear. Thank goodness Justi expresses the recessive gene that makes her ears just so.

I was early, so I went in to order a cup of coffee. I threw caution to wind and chose something with dairy–lactose intolerance be damned during times of war. The waitress was friendly and sociable. She talked about the coffee shop as if it was an old friend, and as she talked, I began to feel like I was in someone’s home, having a chat. I took my coffee outside to the open square. The sun beamed down on the tables and coruscated off the burbling water from a stone fountain. I really did start to feel like I was heading into therapy at that moment outside with the “nature track” playing around me.

Justi strolled out minutes later with a diabolical coffee drink that put my dairy-infused beverage to shame. We talked for a long time, accompanied, for the most part, only by a tabby cat who sprawled out beside us to soak the heat.

Did I write? No. Can I unequivocally say Holy Grounds is a great place for writers? Yes. It had just the right ratio of noise to silence. Just the right mood. Just the right space. I only wonder if it would be challenging in less perfect weather as most of the seating is outdoors.

In any case, it’s spring. I’m returning with my laptop.

I think that somewhere in Koreatown, there exists a Tom N Toms wrapped in a Tom N Toms stuffed with pureed Tom

N Toms. This chain coffee shop is ubiquitous in that neighborhood. I have seen Tom N Tomses two blocks away from each other. I’m not exaggerating–Justi was directing me to one of these coffee shops and I ended up at a different one just down the street. We were both confused.

Going to a Tom N Toms might be considered cheating in the context of this series, which focuses mainly on independent, local coffee shops, as it is the Starbucks of Koreatown. But Korean coffee shops have such a unique flavor to them, visiting does become an experience for the unfamiliar caffeine addict. 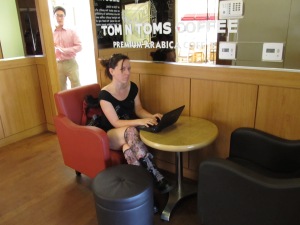 Ignore the random shocked man in the background…if you can.

What coffee shop serves different types of brick toast? And I swear I had the best iced green tea latte ever here (Green Tea TomNccino).

I hear these coffee shops are packed with young, noisy types later in the day, and that they blast K-pop directly into your ears. Luckily, it was early in the day when we arrived and only a few older groups sat outside to people watch and chat on the porch with a soft soundtrack of bad, but ignorable, smooth jazz. So I can’t give these rumors credence. Yet.

Tom N Toms is near the top of my list in terms of how much work I got done.

I don’t live near this particular shop anymore, but I was informed about another near my office and recently checked it out. I’m not telling you about that one because I intend to use it as my almost-daily spot and I like having a place to park on the street.

8 thoughts on “Best Place to Write in Los Angeles #4”