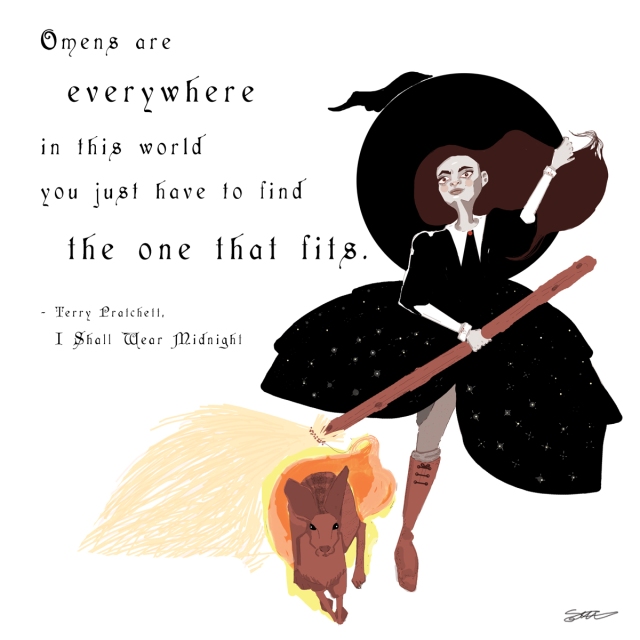 I finished Terry Pratchett’s I Shall Wear Midnight last week, and it was the perfect salve to a week of terrible news and family crisis. Pratchett is always the right move when you’re facing difficult times and need to feel like the world isn’t entirely, completely against you. And I got around to another #ReadtoDraw illustration (above) as a result.

I Shall Wear Midnight is the fourth book in the five-book Tiffany Aching Adventures series, and is one of his Discworld books. But, as is the case with Discworld books, each book stands on its own. The others are referenced here and there, but they aren’t required reading to get what’s happening.

I’m going to read the last book, The Shephard’s Crown, next because it’s the last book Pratchett ever wrote. Predicting that my heart will break, I can then go back to the beginning and read the book I missed–The Wee Free Men. Somehow, I think that will soften the blow and make the final book seem less … final. That’s the strategy.

Here’s the Goodreads blurb, in case you’re interested in reading it (you really should):

It starts with whispers.

Then someone picks up a stone.

When people turn on witches, the innocents suffer. . .

Tiffany Aching has spent years studying with senior witches, and now she is on her own. As the witch of the Chalk, she performs the bits of witchcraft that aren’t sparkly, aren’t fun, don’t involve any kind of wand, and that people seldom ever hear about: She does the unglamorous work of caring for the needy.

But someone or something is igniting fear, inculcating dark thoughts and angry murmurs against witches. Aided by her tiny blue allies, the Wee Free Men, Tiffany must find the source of this unrest and defeat the evil at its root before it takes her life. Because if Tiffany falls, the whole Chalk falls with her.

Chilling drama combines with laugh-out-loud humor and searing insight as beloved and bestselling author Terry Pratchett tells the high-stakes story of a young witch who stands in the gap between good and evil.

Another day, another slaying by Helen Oyeyemi. After reading Boy, Snow, Bird, I wanted more more more, and picked up White is for Witching. I’m a sucker for witchy books, so it was a no-brainer.

There’s something strange about the Silver family house in the closed-off town of Dover, England. Grand and cavernous with hidden passages and buried secrets, it’s been home to four generations of Silver women—Anna, Jennifer, Lily, and now Miranda, who has lived in the house with her twin brother, Eliot, ever since their father converted it to a bed-and-breakfast. The Silver women have always had a strong connection, a pull over one another that reaches across time and space, and when Lily, Miranda’s mother, passes away suddenly while on a trip abroad, Miranda begins suffering strange ailments. An eating disorder starves her. She begins hearing voices. When she brings a friend home, Dover’s hostility toward outsiders physically manifests within the four walls of the Silver house, and the lives of everyone inside are irrevocably changed. At once an unforgettable mystery and a meditation on race, nationality, and family legacies, White is for Witching is a boldly original, terrifying, and elegant novel by a prodigious talent.

I didn’t expect this book to give me a fright, but a fright it gave. Oyeyemi possesses a skill for that quiet, creeping terror I find missing from my recent straightforward horror reads. If you’re hesitant to read genre fiction, favoring literary fiction, I’d recommend this book in a heartbeat, especially if you’re looking for October/Halloween reads. As mentioned in the book blurb, the subject matter is complex and grave, but its handled in the realm of the supernatural. I’m becoming a big fan of focused real-world subject matter through the speculative lens, thanks to this and other books I’ve read recently.

On a side note, I haven’t been posting much #readtodraw art, but decided to start again, only with books I find visually compelling. This was one of them.

This post was originally published by Book Riot on June 16, 2015.

Maybe in high school you used books as screens to shield your eyes from the hordes of silverback peers who would surely bare their teeth if you looked up. Or, having dared yourself to attend a party full of strangers only to end up squishing your entire being into the darkest corner of the room like a flavorless wad of chewed-up gum, you turn to your phone and the ebook you downloaded JUST IN CASE (thank the lord, hallelujah) and laugh hard at the funny parts so people think you’re having a super-cool text war with Ricky Gervais instead of what you’re actually doing, which is to say being a terrified, midnight-hit Cinderella in a party dress turned wine-stained clown suit…

What I’m saying is, I’ve been there. And though my lifelong fear of social situations has somewhat improved thanks to my introduction to alcohol at (let’s say) twenty-one years old, I still mostly rely on the daring of fictional characters to sate my need for a bit of rebellion. As I’m the sharing type, I offer you my book recommendations–a starter kit of sorts–for the introvert looking to stir some vicarious living into a, perhaps, milky-toasty lifestyle. And I suggest turning to the young rebels because what better time for feigned confidence than those awkward, uncertain teen and early adult years?

Fenfang Wang from Twenty Fragments of a Ravenous Youth by Xiaolu Guo: At seventeen years old, Fenfang leaves her village and peasant life to claim youth and get hers in the bustling, big city of Beijing. Equipped with a middle school education and experience digging up sweet potatoes, she sets out for a career in film. I was on intimate terms with Fenfang from the outset and felt like a village friend reading about her life as an extra, her re-education, and her unsatisfying relationships in the city while goggling at the accompanying photo illustrations. Her street-smart irreverence and effortless curses (“Heavenly Bastard in the Sky”) sold me. Fenfang is the sort of person who acts on gut instinct, risks be damned. For a month, she squats in a house previously occupied by a mother and daughter whose deaths Fenfang witnessed on her first day in the city. Yeah. If you ever grew up in a small town, dreaming of and fearing city life, Fenfang is the rebel for you.

Y.T. from Snow Crash by Neal Stephenson: And if I had to live in Snow Crash’s anarchic future America, where corporations and the Mafia rule, and the streets may as well be prison yards, oh, and I was trying to help save the world from a cyber virus that turns everyone who plugs into the Metaverse into a cultist zombie, I would want to be Y.T. Fifteen-year-old “young, fast, and female” Y.T. who fulfills her courier duties on a skateboard, “pooned” to taxis and trucks, who beguiles a bad-guy biker and murderous harpoon expert to infiltrate enemy lines, and who worries about her mother. She’s obviously gung ho for enlistment in an intelligence theft mission. You would probably have a heart attack if she was your daughter, but Y.T. isn’t all edge–she does save a Rat Thing (think dog, but not really) from peril. Being a young rebel doesn’t necessarily make you a bad kid.

Lyra Belacqua from The Golden Compass (or Northern Lights) by Philip Pullman: The movie was awful but the Lyra I met in His Dark Materials #1 was everything. I have a wild child soft spot as I was feral and fearless before self-awareness set in. Lyra is as sneaky and obstinate as they come, but she’s also fiercely loyal and a natural protector. What I most admire about this particular rebel is that, in a genre sometimes bogged down with wishy-washy, heartsick young characters, Lyra comes into the picture with a strong sense of self and a no-nonsense attitude. Some kids just got it.

I guess instead of reading about the lives of rebels you could actually enact some daring-do off the page. If that’s your thing. But first, who’s your favorite young rebel of fiction?