In Episode 3 of SZWordeatery, I go over some DOs and DONTs of running a Kickstarter campaign. These are tips I wish someone had given me from the outset. I’m 6 days away from the end of my own Kickstarter for Vol. 1 of Beatrice is Dead, the graphic novel I authored!

I’ve been a delinquent blogger, vlogger, writer…everything. I know this. Here’s the deal. I go through these periods where all of my best laid plans bottleneck, congeal, and morph into a hideous, screaming hydra. I’m currently chopping at this hydra with a dull machete, trying to nap and be a human being in between swings.

My problem is that I have more plans than time. As my bestie, Alyssa, puts it, I’m burning the candle at both ends and in the middle.

The bad news is I’m bone-weary and overwhelmed all the time; the good news is that things got done. For instance, illustrator Robert Burrows and I have launched the Kickstarter for the first volume of our graphic novel, Beatrice is Dead!

I’ll just leave the video and Kickstarter link here…you know, in case you want to do something with them.

The video is PG, but please do note that Beatrice is Dead was written for an adult audience.

I should probably put more fanfare behind this, but I’ve decided that this blog is the one place where I don’t have to be a marketer. But I am immensely proud of this graphic novel and I do hope you’ll back us if the story interests you.

Click the header directly below for the Kickstarter page.

Something about the look of sci-fi novels always put me off as a kid. I was much more a fairies and sorcery kind of girl. But when my friend recommended Snow Crash with the promise that it would be good, I decided to give sci-fi a try. That is, after letting the book sit on my shelf for almost half a year.

I finally dusted it off before my cruise in August because I hadn’t had time to purchase or borrow vacation reading. I’m so glad circumstances worked out that way–it’s been a while since I’ve had so much fun reading a book, and author Neil Stephenson invented my new favorite female character. 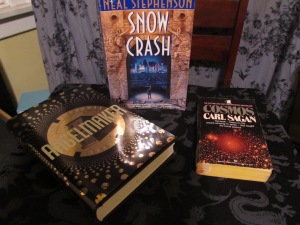 Snow Crash follows the adventures of hacker and pizza deliverer Hiro Protagonist (clever, eh?) and his pseudo-sidekick Y.T., a courier, as they try to trace and cure the source of a virus that’s infecting other hackers in a virtual world called the Metaverse. Reality in Snow Crash is actually an alternate reality where the mob and massive conglomerates run the world and the government is too flaccid and bureaucracy-encumbered to run anything…sounds vaguely familiar.

I always thought the strong female character was contrived, but Stephenson does it right with Y.T. She’s so bad-ass she upstaged Hiro in my opinion. Y.T. is this punky skateboarding chick who can’t even be intimidated by the mob–or, at least, she doesn’t show it when she is.

The whole book is chock full of memorable characters. Even the bio-mechanical animals in the book have depth.

Read this book. It’s been picked up for a film adaptation by Attack the Block director Joe Cornish. It’ll be really interesting to see how they translate it, especially some of the admittedly bulky Sumerian myth exposition scenes. Good luck with that!

Smell as Bookish as You Feel

It might seem random to bring up perfume on a blog about writing, but CB I Hate Perfume’s In the Library scent is actually extracted from the pages of a book!

You know how some scents advertise their kiwi, strawberry, floral, amber, etc. notes and when you spray some on it smells like something made by a lab coat? This is not that kind of scent. I bought a tester and dabbed some on. I was skeptical even as I purchased it, but I had to try it. After about 10 minutes I kept catching this familiar, haunting, addictive aroma; I realized it was books and it was me. Oh it’s so good.

Book Riot has a great interview with the scent’s creator here.

Last week, I went to my friend Meaghan O’Keefe’s book signing. She did all of the art for Identity Thief, a suspenseful graphic novel. I’ve watched Meaghan’s progress on the illustrations for some time and it was gratifying to see her hard work finally come together in a cohesive, visually stunning book. I’m so grateful to be in the company of such talented people.

Her book can be purchased here. She also has some great tees with art from the graphic novel.

My graphic novel co-creator, Robert, and I just signed our contract. Having now dealt with this aspect of publishing a graphic novel, I can officially say this was my least favorite part of the process so far.

I try to be informed and fair, but I’m certainly no shark when it comes to business. I’ve heard some scary tales about contracts in the comic world: Alan Moore’s issues with publishers, Neil Gaiman and Todd McFarlane’s dispute over Spawn, and, more recently, Tony Moore’s suit against Robert Kirkman over payments from original collaborations. Contracts are a sticky topic in general, and certainly in comics.

From the outset, Rob and I agreed that Beatrice is Dead would be a 50/50 collaboration. This, I naively thought, would make our contract simple. But I quickly realized that there are other issues one must consider.

What happens if you, the writer, want to produce a sequel, but the artist doesn’t want to be involved? Or vice versa. Should the original collaborator receive payments for sequels? If so, how much? What if you die? What happens to future royalties and who has rights to produce more comics based on your original work? How will the money be divided if your work gets optioned for a television or movie adaptation?

I felt a little silly discussing what would happen postmortem, but these are serious questions. Life is unpredictable and it’s better to prepare for hiccups and the seemingly-impossible than be left in a mess because you thought it would never happen.

We started the contract drafting process here: http://www.hollywoodcomics.com/collab.html. This was the best free template I found online. After several drafts, we were both happy with the arrangement. We both felt protected and that’s important.

With a contract, you’re not only safeguarding your work and rights, you’re also protecting a working relationship. Yeah, it’s important to make sure you get what you deserve, but that doesn’t mean being selfish and only looking out for number one. If it’s a collaborative process, the reward should reflect that.

Beatrice is Dead is an upcoming graphic novel. As in, I currently have no product. What do you mean I still have to market?

Even though movie previews and advanced marketing for entertainment make complete sense, it never occurred to me that this sort of thing happened in the writing world. By now, I’ve grown a little more accustomed to ideas on building an audience; I have begrudgingly abandoned the fantasy that once you write a book everyone will buy it, of course, and you can quit your day job and get to jet setting.

Social media has provided so many tools for self-promotion and to garner support for products-in-the-making, it’s almost shocking when someone doesn’t grab at the opportunities available. Just look at Amanda Palmer’s Kickstarter ($736,347 in crowd sourced backing so far!!!).

I don’t have a Kickstarter for my graphic novel, and I haven’t thought about creating one, but I have been considering tools to build readership. Because I’m a little weird about this stuff–I sometimes spot a sheen of ick on self-promotion and marketing–I decided that I’d take the “give them something for their troubles” route. Added value…whatever you want to call it. I’m not famous, I don’t have a massive fan base (and I only wish the county gift-wrapped a box of connections and left it at my front door by dint of a Los Angeles address). If I was going to ask people to “Like” the graphic novel’s Facebook page, I’d better give them a reason to do so.

It didn’t take much thinking to figure out what I would gift potential readers. I had advised a Facebook friend who said she was never able to write a short story without wanting to turn it into a full-length novel. I suggested she write short stories based on side characters in her full-length WIPs. The memory of that comment, combined with the constant stream of alerts to free reading on my personal FB page brought me to my answer.

I’d give the BID side characters a little of the spotlight through free (FREE FREE FREE!!, as it’s posted everywhere) illustrated flash fiction posted to the FB page every month. The stories would give people the opportunity to get to know some of the characters in the story, the mood, Robert’s art, and my writing style. Then, if they liked what they saw, they might click that Like button and spread the word.

Writing and illustrating takes time and I was afraid Rob would think I was trying to give him carpal tunnel with my ideas, but we’re both deeply invested in this project and are putting our all into it. Recently, I posted the story to Issuu as well. You can read it by clicking the cover above.

After posting the first short story, I took out a FB ad with a low budget, advertised the free horror stories, and we more than doubled our Likes in three days! Our audience is still pretty small, and I can’t afford a major ad campaign, but it’s only been a month and if we keep this up, posting quality illustrated short stories and taking out small ads, I’m hoping we can have a sizable audience by the time BID is in print.

And, now that we have our bookmarks as well, it’s time to step away from the computer and take our marketing to comic stores and events. Eep!